This year I spent quite a bit of time learning. The last big challenge was the Week of REST in beautiful Derbyshire, September 5th – 9th. It was an amazing week and I am still impressed by how much I learnt during those few days. And it sure wasn’t necessary to be so nervous about it. 😉

Monday was dedicated to arriving and checking the set up or setting up the computers. I had done that back at home already. What it did not show me, though, was that my MacBook would get all panicky when running “npm install” several times.
(In hindsight I believe it was partly TextMate that was to blame as well as Google Chrome that seems to use quite a lot of ressources. Using Firefox and Atom makes things a lot more manageable. Still, I’ll need to get a new computer, I’m afraid.)

Darwin Lake is a beautiful place to be, perfect to disconnect for a while. Or to be able to concentrate on a workshop like the “Week of REST”. No mobile signal to speak of that might distract you. 😉

We went from going through a JavaScript recap with Zac Gordon and learning all about the toolset we would use (Webpack and Babel). Joe Hoyle then walked us through the app we would be building, a live blogging app.

During the next days Zac, Joe and Ryan took turns going over different aspects of the project. Zac’s part was to help us understand the underlying principles and get more proficient using REACT. Joe walked us through the project and Ryan was there to educate us about more complex matters, like OAUTH and authentication.

I very much enjoyed the atmosphere. It reminded me a bit of a small WordCamp or a Contributor Day. Things were very relaxed, and even though Zac, Joe and Ryan did different parts of the project, they were always there, ready to jump in if questions occured.

Not to mention a couple of others belonging to the Human Made team who helped out by either helping us when we struggled with code or computer (thanks so much, Matt!)  or supporting the event in the background (taking care of all kinds of needs that arouse during the week, making sure the fridge was always filled with plenty of stuff and last but not least, posting my birthday cards for me.. 😀 ).

It was pretty cool not to have to worry about anything – food was good and plenty, Zac offered yoga in the mornings and quite a few people played games together till late in the evenings. (Code Names, anyone?)

On Thursday we even had a party, starting with a 3 course dinner and continuing with bar keeper and even a casino later on. Jenny made a beautiful fire outside and you could just sit and look at the fire if that was what you wanted.

On Friday we concluded by going over different things one could build using REACT and the WordPress REST API, looking at examples and starting to grow ideas of our own.

It was over much too soon, even though I also was pretty exhausted by the end of the week. It was a wonderful place to learn and tackle new things. I’d love to be able to continue learning like this!

A big thank you to all who made this possible, especially Shioban, Zac Gordon, Ryan and Joe and all the helpers in the background, especially Jenny, Ana and Zoe. (Hope I did not forget anyone!) 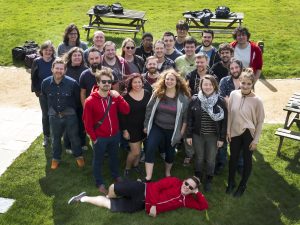